Honda Is Planning To Take Over The Adventure Bike Segment

Way back in July, 2015, we asked you whether it was possible that Honda was quietly attempting to take over the adventure motorcycle market segment (click here).  Well two bits of news seem to confirm what we speculated more than 7 months ago.  Honda is indeed taking steps to produce an adventure bike product line for the lightweight, middleweight and heavy adventure bike market segment.

We all now know that Honda has resurrected the beloved Africa Twin as its heavyweight adventure bike offering.  Deliveries will start in the United States in June/July with other parts of the world already taking deliveries of the new machine.  Although completely different from the original Africa Twin, response to the Africa Twin has been and continues to be exceptional.  But now it appears that Honda has already taken significant steps to produce lightweight and middleweight adventure machines and upgrading the Africa Twin for more off road capability.

At last year’s Osaka Motorcycle Show, Honda rolled out its new “concept” CRF250 Rally.  The concept was based upon Honda’s CRF250L dual sport bike, but was outfitted with a larger fuel tank, revised bodywork more in line with the adventure/rally sport, a windshield and other goodies like a Mugen racing dual exhaust, lots of billet aluminum and other anodized parts.  During this year’s Osaka Motorcycle Show, Honda changed the bike’s designation from “concept” to “prototype”.  If the new Africa Twin is any example, the change from concept to prototype means the bike will be released to production in the not too distant future.

Looking like a smaller street ready version of the CRF450 Rally that competed at the Dakar, the CRF250 Rally is a lightweight machine that Honda hopes will dominate the highly requested and under served lightweight adventure motorcycle market.   The new prototype version was shown with a single Termignoni exhaust, bits of carbon fiber, a revised windshield, LED headlights and standard aluminum triple clamps and wheel hubs.  It’s unlikely that the new CRF250 Rally will come stock with the Termignoni exhaust or the carbon fiber, but you could argue that if this is to be a true off road adventure machine, the Termignoni and carbon fiber are unnecessary and expensive bits that won’t serve a substantial purpose in day to day running.  Perhaps Honda may offer these items as optional accessories, but in an effort to make the bike more affordable, these bits will likely not be part of the production machine.  You can find more detailed information over at our friends at ADVPulse.  As far as when the bike will actually be put into production, England’s Motorcycle News (MCN) claims that the new CRF250 Rally will be on sale later this year as an early release 2017 model.

Are you interested in what the CRF250 Rally prototype looks like?  See the below for a more detailed look including some pictures that show some of the differences between the concept and prototype machine. 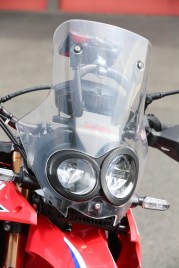 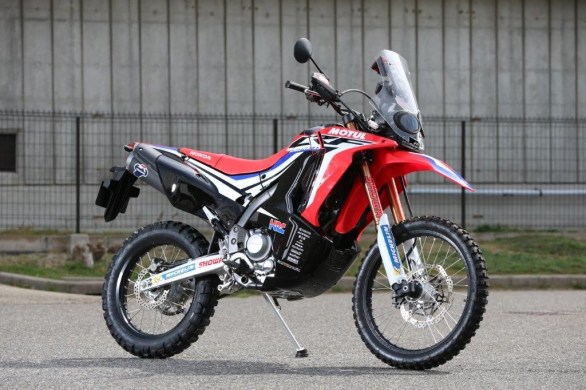 If Honda keeps this up, the likes of BMW and KTM may have to be looking over their shoulder from the competition, or worse yet, looking ahead as the competition passes them by.  Stay tuned for additional articles and information on Honda’s potential new middleweight and heavyweight offerings in the next couple of days at Ride2ADV.

If you enjoyed this article and found it informative, please “Like us here as well as on our Facebook Ride2Adventure page.