In a misty drizzle just outside of Fermont, we rounded one of the corners beyond a railroad crossing.  A road grader had recently passed and left a rather high gravel and dirt berm near the middle of the road.  It has also apparently stopped there and made a slight turn because it had left a small pile of gravel and dirt a couple of feet to the right of the high berm.  It wasn’t that big but that was part of the problem.  It was difficult to see and it was also solid since it was filled with gravel.  Soft enough to dig into but not soft enough to plow through.

I was about 100 yards ahead of Kim on my bigger KTM 950 and saw it in time to take evasive action.  I don’t know why I didn’t signal her or tell her about the berm on the communicator.  I guess I just figured she would see it.  Dummy!  Well she was on her smaller BMW F650 single and she hit it fairly dead center causing her to fall off and pile drive the big toe of her right foot into the gravel of the roadway.  It also knocked off one of her panniers and tweaked the pannier frame and lock. 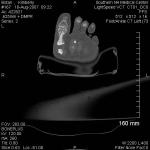 I turned around and Kim was more concerned about the bike than herself.  She said her foot was a bit sore but was more concerned about how we would get her pannier closed, locked and back on her bike.  (It turns out that Kim had actually broken her toe and rode the remainder of the trip with the second bone in her big toe split in two, almost down the center.  I told you she’s pretty intrepid!) I had good tools and with a few tie wraps, a couple of temporary bolts, a bit of bending with pliers and smacking with rocks, we were ready to go again.   Of course, the rain had to pick up and we pressed on in the rain and gathering darkness towards Labrador City for a rest and to get some appropriate bolts to fix Kim’s panniers.

When we arrived in Labrador City, it was fairly late; almost 9:00 PM.  We hadn’t had any dinner and we were wet, cold, tired and hungry.  The restaurant was already closed and we asked about nearby places to eat.  It turned out there weren’t any open within walking distance, but the hotel folks graciously opened the bar area to us and got us some hot soup and a sandwich which we gratefully accepted.  What nice people!

The following morning, it was still raining and raining with abandon.  We went in search of hardware for Kim’s panniers and were given directions to a small store in town.   They unfortunately did not have what we were looking for and we were standing in the parking lot trying to figure out our next move when a somewhat familiar voice said, “Hi you two, what are you doing here?  We looked over and there was the woman who we had met while we were in a small hotel in Baie Comeau.  We had chatted a bit and she had said she and her family lived in Labrador City and they were returning in the process of there when we met them at the hotel.  Now here she was at this chance meeting!  We told her of our predicament and she said she could help us out and led us to a hardware store that did indeed have the parts we needed to fix Kim’s bike.  We thanked her and before we could get her full name and address, she was off.  The kindness of people is amazing.

With Kim’s bike repaired, it was only a short ride on pavement until we got back onto the gravel of the TLH.  “Civilization” quickly faded as the gravel grew deeper and the trees grew thicker, taller and greener.  We were headed to Churchill Falls and we were really into some isolated country.  It was gorgeous, but it was indeed immense.  Mountains surrounded us in many shades of green.  Light green and dark greens literally covering the mountains like a patchwork quilt of  trees randomly distributed over and around the mountain sides.  Once off the mountains, large plains could often be seen, sometimes populated with thriving green trees or sometimes with the dead trees that had expired in forest fires or been killed by flooding.  And as we traveled on, not a glimpse of man made civilization was to be found.  Not a sign, telephone pole, street light or manhole cover.  It was wilderness and it was amazing.

After traveling for a few hours we decided to stop for a snack of a powerbar, some nuts and water.  By stopping, the presence of the wide open wilderness became even more omnipresent.  It was overcast and no breeze blew.  It was very quiet.  The road and surrounding terrain was flat and we cold see it disappear around a wooded corner in the distance.  Nearby, a large sand berm approximately 10 feet tall offered a better vantage point to view the surroundings so I climbed it to look around.  With the view from that berm, I could see even farther into the open and vast space around me, bracketed by verdant mountains.  It was beautiful and scary at the same time.  I looked down from the berm to see Kim standing 20 yards away and she looked miniscule framed by the surroundings.  It was a surreal moment, one where you feel like you are only a very, very small part of the earth.

Wake up! I told myself there’s a lot more of Labrador to travel so I disengaged my mind from the scene and climbed down from the berm.  We needed to get to Churchill Falls before dark and we still had plenty of miles to go.  After what seemed like many hours in the wilderness, we arrived in Churchill Falls and the beginning of paved road again.  Churchill Falls was built exclusively as a town to service the nearby hydroelectric dam.  It is a small self sufficient town complete with hotel, high school, supermarket, and restaurant but all are in the same building.  When you have to be self sufficient this far out, there’s little credit given to waste.  So if you are going to build a large public complex, you may as well build them all together at the same time and that’s exactly what the folks in Churchill Falls did.  Bravo.

We did get to experience a bit of what the locals must have to do all the time.  When we went looking for food in town, the restaurant was closed because they didn’t have a chef.  But we were told that the local bar had food.  So we went there but they were a bit low on supplies as well.  Kim ended up having fried cod chunks and water, and since I don’t like seafood, I ended up with mozzarella sticks and beer as a 100% nutritionally complete dinner.

The following morning we got up early for our ride to Goose Bay and the first major ferry ride of the trip.  We’ll tell you more about that in Part 4.

Tell Us What You Think Cancel reply