The latest episode of our Planet Ramble has just been posted.  This time we run into mechanical problems, find the meeting place of Black Bison, inadvertently find Harley Heaven in Slovakia and get free Harley Fuel.  If you’d like to ride along, click HERE.  If this doesn’t work, cut and paste the below link into your web browser: 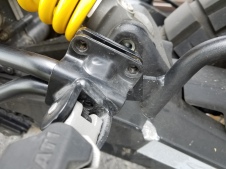 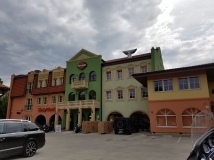 We hope you come along for the ride!

Motorcyclists: Our Differences Bind Us Together

Recently, Kim and I were having dinner at a small roadside café in the tiny town of Woodstock, Vermont.  We enjoy it because it’s small, has a nice atmosphere and is a place where we can bring a bottle of our own wine and enjoy a meal.  It was near closing time and the café was getting ready to close when a pick up truck pulled up and a couple got out.  The owner of the restaurant met them at the door and told them that she was getting ready to close, but could make them a light dinner before she did so.

The couple said that they were just looking for some takeout dinner and ordered from the menu.  During this time, Kim and I sat at our table and finished our dinner.  Our bottle of wine had a little more than a glass left so we offered it to the couple who had walked in.  The man of couple accepted the wine, introduced himself as Frank and thanked us.  We told him it was our pleasure and after some very brief pleasantries, we paid our bill and left.

The following week, we were back at that same little café.  The owner told us that the couple had purchased my book, “Mr. Cotton Wanders Europe.  Where To Next?”, that they were long time riders and that they had a part in resurrecting the iconic Indian Motorcycle Brand.  I was pleased that they had purchased my book, but I felt a little angry at myself for not reaching out to them to chat more before we headed out the door.  We shouldn’t have been in such a rush.

Here’s where we get into the part of the Motorcyclist’s connection.  Just a couple of days later I received a comment on R2ADV from who else but Frank.  He thanked us for the wine again and suggested that we meet as a couple sometime.  I immediately responded and told him that we’d enjoy getting together again to spend some time talking about motorcycles and motorcycling.  We made plans to meet at the same café the following weekend.

Kim and I arrived a bit early and soon Frank and his wife Barbara arrived.  For a while, we had the basic chit-chat about where we lived, what we did and what we liked about the town of Woodstock.  Before we knew it, we were talking about motorcycles.  Frank and Barbara told us some excellent stories about riding and how motorcycles had been a part of their lives for a long time.  Frank told us of how he used to pick Barbara up on the motorcycle when they were dating.  Soon, Barbara wanted to ride and Frank was the one on the back seat.  The only problem was that when they came to a stop, Frank had to put his feet down to keep the bike upright.  He also said that Barbara was an accomplished rider and recounted the time that he was on the back and awoke when Barbara was passing a tractor trailer at full throttle.  Clearly, motorcycles had been a part of their life for a long time.

The more we chatted, the more we learned about each other.  They were cruiser oriented pavement riders and we told them that we were more gravel and adventure oriented riders.  Frank has been and still is a captain of industry and enjoyed several years resurrecting the Indian Motorcycle brand chartered in Springfield, Massachusetts.  Barbara invests in and improves real estate as one of her many projects.  She also led the Indian Motorcycle cross-country ride from the original Springfield, Massachusetts plant to the new one in Gilroy, California before Indian was sold to Polaris.  We on the other hand led significantly more mundane business lives.  Frank and Barbara were more comfortable wearing leather on their rides, while Kim and I were more comfortable in cordura and Gore-Tex.  They enjoyed the quiet and solitude of riding without communications, their minds free to roam while they enjoyed the sights and sounds of the road.  We on the other hand prefer to have electronic communications so we can keep track of each other and perhaps chat a bit about what we were seeing and feeling.

So as we talked about motorcycles and the places we had ridden, it became clear that although we had different riding styles, we were united by motorcycles and riding.  It didn’t make a difference that they were more pavement oriented and we more gravel oriented.  It didn’t matter at all.  What mattered was that we all had a love of motorcycles that supplied a bond unfettered by any of those other life constraints.

Before we knew it, a couple of hours had passed.  In fact, we connected so well that Frank asked us if we’d like to see his bikes and take a tour of his garage.  He didn’t have to ask either of us twice and we both almost simultaneously said yes!   When we arrived, Frank opened the door, and what a sight!  Lined up neatly on the right hand side were about twenty bikes.  Filled predominantly with Harleys and Indians, the space gleamed with chrome from both new and old machines.  There were new Harleys and classic Harleys.  There were original classic Indians and Indians that Frank and Barbara had resurrected from the ashes of the old company.  There was even an old Indian side hack with a working hot dog stand attached.  Seeming somewhat out of place was a red Moto Guzzi screaming to be released to the road.  It is one of Frank’s favorite rides and if I owned one, it would be one of mine as well.

So as we stood there in Frank’s garage, I thought about how lucky we were to meet people like Frank and Barbara.  A chance meeting had brought about a new friendship united by motorcycles and riding.  We learned more about the pavement world and we shared a bit about adventure riding.   It was a great experience for the both of us (I hope).

So don’t let the differences between types of motorcycles become a dividing factor.  Use it as a uniting tool and learn a little more about what your fellow riders are all about.  So Frank and Barbara, our invitation still stands.  If you want to get a taste for adventure riding, we have the space and the bikes to give you an introduction.  We hope to meet you both again, perhaps on the gravel?