I’ve had a little time to ride in Sidi’s Adventure Goretex Boots and have formed an initial impression of their performance.  On a sunny Vermont day, we were able to put in a little over 100 miles mostly on pavement with some dirt and gravel and a tiny amount of slimy mud left over from the Vermont mud season.  With temperatures in the high 30s to low 40s, we did everything from low speeds to some higher speed twisties, so we had a fairly good day and mix of conditions to get initial impressions.

In keeping with a more pure off road bias, the Sidi Adventures are a fairly tall boot.  If you are used to a “normal” road boot, you’ll immediately notice the increased height of the boot.  In addition, it’s also significantly heavier than many road boots so when you first pick them up to put them on, you’ll immediately notice the increased weight.  Once on though, the weight is less noticeable.  Also immediately apparent is the increased stiffness of the boot.  It’s not as stiff as a pure off road boot, but it is fairly stiff and it will take a bit of getting used to if you have previously only been a road boot user.  If you’ve been in pure off road boots before, the Adventures will feel soft.

I found that the boot was a bit fidgety to get on, particularly the upper buckle.  It’s nothing significant, but you will have to do a bit of adjustment to get the buckle to overlap correctly.  This will likely go away with use, but it was a bit of a fuss on the first few fittings.  Not a significant worry however.   On the other side of the coin, adjusting the length of the buckle straps couldn’t be easier and Sidi has done an excellent job here.  A mere snap of the strap downward releases it for adjustment and when you have it adjusted properly snap it up back into place and you are done.  Wonderful!

Once you get the boot on, one thing you will immediately feel is the security of the boot and that is a good thing.   Your foot and leg feel encompassed by the boot; not oppressed by it.  It’s stiff but it feels stiff in all the right places.  It has a large shin guard plate and guards at the ankles and shifting areas.   I felt protected in this boot.

The interior of the boot was roomy enough for my very wide feet which are EEEs.  Normally, I take out the footbeds of my boots and insert rubber insoles as well as a 1 1/4 lift due to a previous motorcycle/car interaction.  I can say that the interior of the boot was roomy enough to accommodate my lift but not my rubber foot beds which are thicker than the factory originals.  So I did have to go back to the factory original footbeds to use my lift.  To translate all of this, I’d say that the toebox and overall interior is fairly roomy.  If you have very narrow feet, you may want to think about adding a thicker footbed, but for folks with normal to wide feet, you should be all set.  As far as sizing goes, I wear a 8 1/2 US shoe and wear a size 43 Sidi Adventure boot.

Initially, the boot had a couple of hotspots in them for my foot and leg.  There was a slight squeezing at the side of my foot, but that eased up as the day went on so I don’t anticipate any problems.  The other noticeable issue was a hotspot on my right shin.  It seemed to be right under the beginning of where the shin guard started only on my right leg.  Once again, this let up as the day grew longer so I attribute this to a break in issue as well.

As was stated earlier, it was fairly chilly out with temperatures in the high 30s and low 40s.  I was wearing one pair of smart wool socks and my feet were always warm and toasty.  They seemed to retain the heat in my boot but never got wet/clammy and therefore did not get cold.  Again, thanks to the wonders of Goretex, these boots can breathe and breathe they do.  We did not encounter any rain or hit any water crossings during this ride, so I can’t comment on its waterproof capabilities at this time but I will update you later in our long term review.

The boots have a lugged sole and offer excellent traction on pavement, gravel or mud which we experienced on this ride.   Since I’ve only worn them one day, I can’t comment on the longevity of the sole, but it does appear to be the same sole as on my previous Sidi Canyon Goretex boots that are 3 full seasons old and the soles look like they have a couple more seasons in them at least.

So can I say that the Sidi Adventure Goretex are worth their lofty price at this point?  It’s hard to tell since this report is only on one day’s ride in the cold.  So once I get some more miles and rides on them in warmer (i.e. hot) weather, I’ll update you all with a long term update and let you know whether I think the boots are worth their high price.  But for the time being, it’s looking like a good investment!

I’ve had a little time to ride in Arai’s XD4 and have an initial impression of it as compared to the Arai XD3.  On a sunny Vermont day, we were able to put in a little over 100 miles mostly on pavement with some dirt and gravel and a tiny amount of slimy mud left over from the Vermont mud season.  With temperatures in the high 30s to low 40s, we did everything from low speeds to some higher speed twisties, so we had a fairly good day and mix of conditions to get initial impressions. 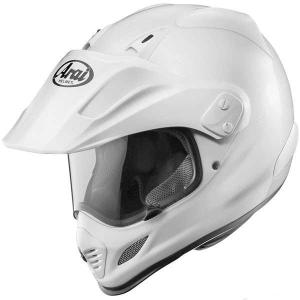 For me, both helmets seem to have the same helmet shape shell and the fit was essentially the same between the two models.  However, for the XD4, Arai has redesigned the cheek pads.  Not only are they a slightly different shape and size, but the cheek pads supplied as original equipment with the helmet are apparently now 5 MM thicker than with the XD3.  In the size M that I purchased new years ago, the stock cheek pads were 20 MM.  Now, in the XD4, the stock cheek pads are 25 MM.  Frankly, the 25 MM cheek pads are probably the best fit for racing and 100% safety, but in return they give you that squished face, kissing fish face feel and look.  Not the most attractive and comfortable way to ride.

So if you don’t like the look and feel of a small aquarium fish, never fear, in the XD4 Arai has thoughtfully included an easy peel 5 MM layer for the cheek pad.  You simply just remove the cheek pads, then the covers and carefully remove the clearly marked 5 MM layer.  I chose to go this route and if I can do it, anyone can.  Then just put the cheek pad covers back on and insert the cheek pads back in the helmet and you are ready to ride, newly minted 20 MM cheek pads and all.

Out on the road, one of the things that the XD line of helmets provides is excellent visibility.  The XD4 continues this tradition with excellent visibility with a wide viewing port, again big enough to wear goggles in if you wanted to remove the face shield.   Another thing that the XD series does well is flow air and the XD4 does not disappoint in this area either.  We did over 100 miles yesterday in temperatures ranging from high 30s to low 40s (F).   You do get a good amount of air around your neck and lower chin so if it’s really cold, you’ll want to make sure you have some way to block the air in theses areas.  However, with closed vents, air flow was blocked off and no cold drafts were noted, so I’m going to say that the seals are apparently good since the XD3 flows a decent amount of air through its vents when moving.  The vents on the XD4 are substantially larger than the XD3 and they portend much more ventilation than the XD3.  I’ll update this when we get into warmer weather.

The shield was susceptible to fogging in the cold, but it was easily dispatched with just a slight crack of the visor.  Nonetheless, I’d suggest an insert of some sort.  Kim and I use Fog City but there are others out there like Pinlock that Arai shields are set up to use.

The visor on the XD4 has been redesigned, is smaller and is claimed to be more aerodynamic than the XD3.  We did ride at a brisk pace during the day, but nothing approaching race speeds.  I was riding a KTM 990 Adventure and if you are familiar with that machine, it has a tiny windshield.  At 5’9″ sitting behind the stock KTM windshield, I did not notice any substantial increase or decrease in buffeting.  If there is a benefit, it must be more recognizable at speeds over 80 MPH.

Weight is claimed to be down on the XD4 compared to the XD3, but frankly to me it’s not that noticeable in riding.  Perhaps over a very long day, the lighter weight would be more noticeable and less tiring, but over a mere 100 mile jaunt, not much difference was noted.  I’ll add that Kim carried the helmet a bit and claimed it was lighter when compared to her XD3 and she’s a pretty good judge of these sort of things.

So there you have it, an initial impression of the XD3 versus the XD4.  Once the weather heats up a bit and we have a few more miles under our wheels, we’ll update you with a longer term update on living with the XD4.